This page lists the new and improved features in version 5. See What’s New (All Versions) for details of features added in other versions. 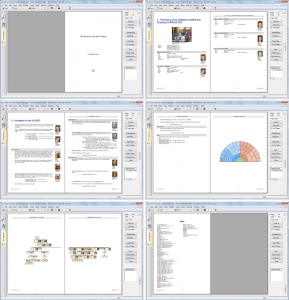 Create professional-looking family tree books and booklets, with a mix of auto-generated chapters and your own ‘free text’ pages and chapters. Add any reports, charts or diagrams to your books, as well as a title page, contents page, index page, and so on.

Books can be saved in PDF format or in word-processor (Rich Text) format.

Style information is now kept separate from content, making it much easier to customize layout and appearance of pages. Performance has been improved. Accent characters are now handled correctly in web-pages.

Clicking on a thumbnail or other image in a generated web-page can optionally cause either the same image, or the full picture the image was taken from, to be displayed blown-up in a ‘popup’ window (see example right). 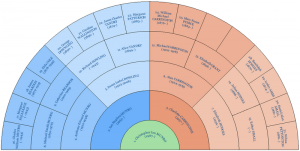 Half, quarter or full sizes. Like tree diagrams, fan charts are ‘dynamic’. Double-click on any box to view and update that person’s details in the Property Box. The Fan Chart will update automatically to reflect the change.

Fan charts have pre-defined content options, but can be configured to show any contents or colours. They can be added to tree diagrams or vice versa.

All-Relatives trees can now be ‘layered’ (previous style) or ‘flat’ – a much-requested enhancement.

Previously, dates were only validated if you pressed the Tab key. Now they are fully validated when the cursor leaves the date field, whether you tab away or click away. If Family Historian doesn’t recognise a date, you will always get a chance to put it right. As a much wider range of date formats are now accepted, it’s much less likely to fail to recognise a date anyway. And if the date is valid but looks inconsistent with other data, a balloon tip will warn you (see example right). 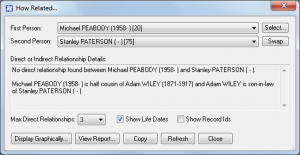 View graphically exactly how people are related, marking the connecting lines on a new or existing chart. Or see exactly how they are related detailed in the new ‘How Related’ report.

There are now 3 levels of backup to choose from, including full backup, which backs up the entire project folder.

You can now import data directly from other program formats. GEDCOM files can be imported and exported in all standard GEDCOM formats (including Unicode, and also UTF-8), as well as commonly-used non-standard ones.

New options have been added to make it easier to export a subset of the Individuals in a project, and the other records that relate to them.

Reports have enhanced performance and improved support for pictures, removing previous limits on scaleability. New features include an optional index. Some reports also have improved layout options. As well as the new ‘How Related’ report, there is also a new report on addresses.

Silhouettes can now be used in diagrams where required, either because no picture is available or for reasons of privacy. Standard silhouette images can be used, or users can use their own.

Diagrams can now have a background picture which can be tiled, centred, zoomed or stretched – and faded as required.

Pictures are now loaded ‘in the background’ making diagrams much faster to load.

Addresses now auto-complete (like places, occupations and other fields) when you enter them. Addresses for an entire project can all now be maintained centrally. There is a new report for addresses, and a ‘Where Used’ button allows all occurrences of any given address to be located in the Query Result Set window. The same functionality can also now be used to locate all occurrences of places, occupations, religions, group/castes, origins and source types. Once listed in the Query Window it is easy to find each actual occurrence of any field within any record, in the Property Box (see the section ‘Enhancements to the Query Capability’ below, for more on this).

The display of address information in reports and query output has been improved. 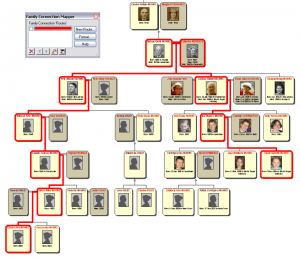 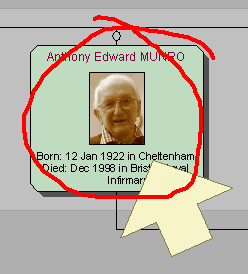 The Diagram Window now has an extra toolbar for adding a variety of items (‘shapes’) to diagrams. Many of these are new, and include ‘smart shapes’ such as arrows, which can be reshaped. You can also add ‘free-hand’ (see example right).

Shapes can be grouped, ungrouped, ordered, resized (maintaining aspect ratio or not), and rotated. They can also be copied and pasted, and stored – not just within chart files, but also as part of custom diagram types.

You can select multiple shapes and format them all together – if say, you want them all to have the same fill or line colour. Text boxes (and the new ‘Pie Shape with Text’ shape) can display any kind of data about specified individuals or about a type of relative (such as, ‘mother-in-law of the diagram root’). Shapes can even be used to create entirely new diagram types. Fan Charts are actually complex grouped shapes, and an example of what can be done with shapes. 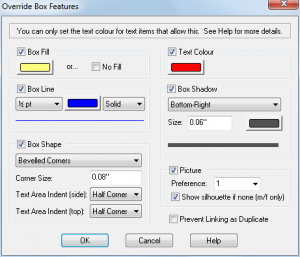 In the past you have been able to specify complex criteria for controlling the appearance of boxes in diagrams using the Boxes tab in Diagram Options. You can still do this, but now you can also simply select one or more boxes and ‘manually’ change their appearance (fill, shape, line size and colour etc) in whatever way you want. 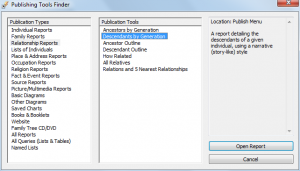 This is a new finder tool to make it easy to find the right tool to generate any kind of output – whether it be a list, a report, a book or booklet, a diagram, a chart, a query – or whatever. You can find them all using the Publishing Tools Finder – the first menu command on the new ‘Publish’ menu. 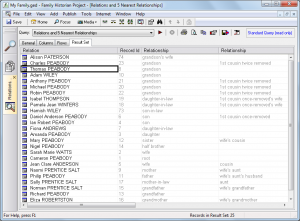 Enhancements to the Query Capability for Searching & Analyzing Records

It is also now much easier to add selected records to Named Lists or to set flags for selected records. Plugins can also generate result sets in the Query Window (see Plugin Store below), and ordinary limits (such as the restriction that no record can have more than one row) do not apply to plugin-generated result sets.

Family Historian now includes powerful built-in scripting tools which can be used to automate repetitive tasks, make extensive one-off changes to data, or even to create new tools or new kinds of output. They can even be used to create plugins for submission to the Plugin Store (see above).

Now Even Easier and More Enjoyable to Use…

Numerous improvements have been made to make the program even easier and more enjoyable to use.

Additional enhancements to the “The Master Genealogist” (TMG) direct import.

Enhancements to the “The Master Genealogist” (TMG) direct import, which can be accessed from the Project window’s New Project button.